The E-TWOW – Electric Two Wheels (pronounced E 2 W) brand is part of a large international concept, with headquarters in China, focused on offering a new era in urban mobility, through our ingenious electric vehicles. The E-TWOW electric kick scooter is a practical solution to everyday life. It was developed by a team of engineers with a solid background in mechanical and electrical engineering. 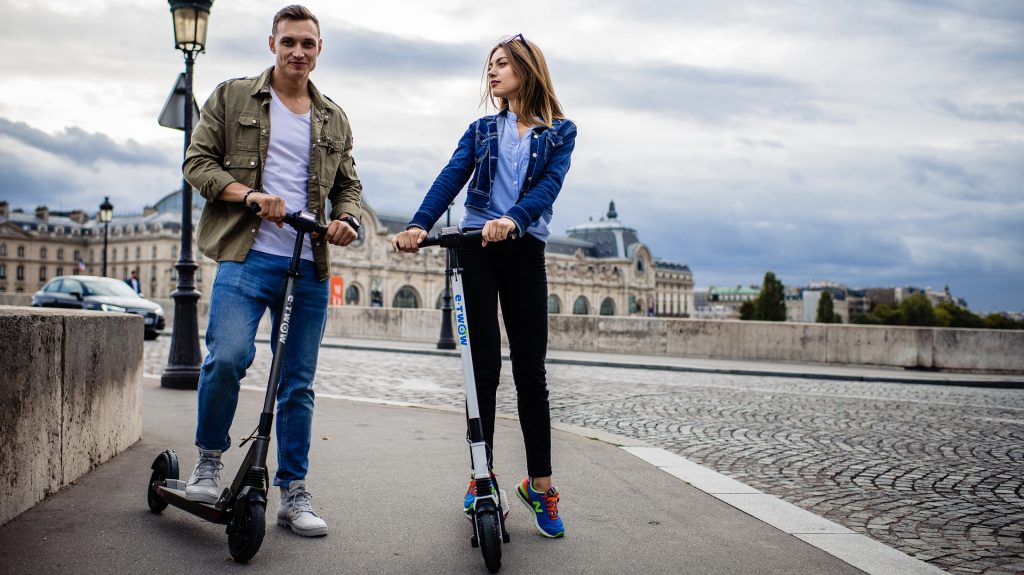 How it all began

The first E-TWOW electric scooter was built in 2013. The invention of the scooter occurred due to the necessity of finding a practical solution to get around in a crowded city.  At that time classic and electrical bikes were the only alternative to cars and public transport. However, bikes were inconvenient, being quite heavy and in many big cities bikes were not allowed  on the subway. As such, the need for a smaller, portable vehicle was undeniable.

We started with a prototype which we tested on the crowded streets of Shanghai. The revolutionary electric vehicle was a novelty at that time, and people were always stopping  on the street to ask about the scooter. It was not hard to imagine how such a vehicle could forever change the way people get around in urban environments. Given the fact that the kick scooter was considered a toy for kids, the electric scooter wasn’t successful from the start. However, it was enough for people to give it a try to convince themselves of the utility of such a vehicle, not to mention the enjoyment that comes with riding it.

How we built a new era in urban mobility

Each year brought on new challenges, but each challenge meant a new improvement. The E-TWOW scooter was the first scooter to integrate a kinetic energy recovery system, which was only used for race cars at that time. Its lightweight and the 3-point folding system, made it one of the most convenient personal transportation vehicles, as it could be carried and stored with ease. The initial design suffered little changes in time, as from the very beginning, the scooter was designed for optimal stability and maneuverability. Nonetheless, newer generations featured major improvements in terms of ergonomics and software.

At first we worked with different factories that produced scooter components, but shortly after, we decided that the only way to ensure the quality of the scooter, was to produce the components in our own factory. Presently, there are three business centers: the China factory, the Germany center, and the European Administrative and Logistics Center located in Romania. The China factory produces almost 90% of the scooter’s components (from the hardware to the software, the motors, all the plastic components, and even the batteries, which are assembled using Samsung cells).

In 2017, the E-TWOW electric portable and foldable vehicle won a gold medal for the best invention at the 45th International Exhibition of Inventions of Geneva. Over the years, several other manufacturers started producing similar vehicles, but the E-TWOW electric scooters continue to be the best choice, due to their high quality, their incredible maneuverability, and overall ease of use. At the moment, the E-TWOW scooter is the only electric vehicle that can be completely functional without a battery. If you take out the battery from another electric vehicle and you accelerate, you will ruin the controller or the brakes. With the E-TWOW scooter, you can take out the battery and ride it downhill without ruining any components. Moreover, even without the battery, you will still be able to use the brakes and the lights.

From the very beginning, the E-TWOW concept was powered by innovation. The scooters integrate the latest technologies in the mechanical and electrical engineering industries. The factory is even equipped with HPRTM technologies. Our high-pressure RTM equipment features personalized patents for mixed structures. We also continuously invest in our R&D Department where we have the best engineers from France, Germany, and Romania.

Our purpose has never been to design a perfect product. Perfection is a static concept, and we strive to constantly progress and innovate. Over the years, the E-TWOW electric scooters have faced many challenges. Nonetheless, through consistent tests and studies, we have continuously improved our scooters and we have eliminated all the problems that have occurred along the way. We wish to thank our clients for the help that they provided through their constructive feedback regarding the problems that they have encountered. We have always tried to thank our clients through adequate service and support, to make up for any inconveniences that we may have caused.

Our vision of creating a new era in urban mobility goes hand in hand with our desire of building a sustainable future. Nowadays, more and more people choose to replace their cars with electric vehicles, and the electric scooter is one of the most environmentally-friendly solutions for urban transportation. Not only that but since it has zero carbon emissions, our electric scooters can also be used indoors, being ideal for large covered areas such as airports or factories.

So you are from ?